Chow mein on a sheet pan

THE WASHINGTON POST – Have you ever seen a recipe title and thought: Say, what? Then, considered the source and immediately wanted to try it?

That’s how I felt when I came across Sheet Pan Chow Mein in Hetty McKinnon’s latest book, “To Asia, With Love,” which made our list of favorite cookbooks of 2021.

McKinnon, who also wrote Neighborhood and Family was born to Chinese-immigrant parents in Australia, so in her cookbook, she describes her recipes as “Asian in origin, but modern in spirit” and the flavors as “Asian-ish”.

Would I consider making chow mein this way without her guidance? Unlikely. Under McKinnon’s tutelage, however, I could see how it would come together.

“While the wok is still the traditional (and arguably the best) cooking vessel for chow mein, a humble sheet pan is also a handy way to rustle it up with minimal effort.” 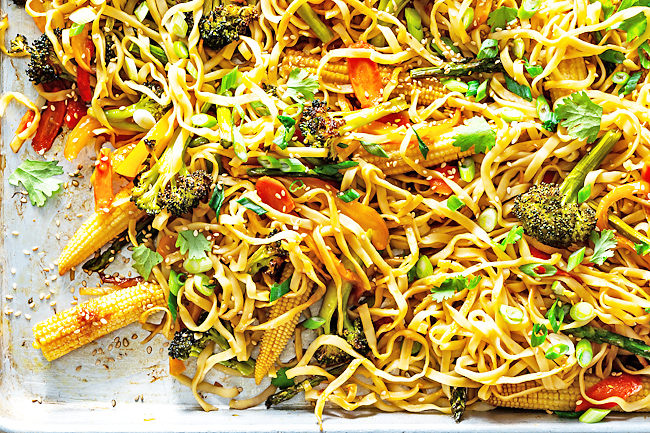 I, along with a busload of other food writers and home cooks, have sung the praises of the sheet pan for years, because as McKinnon points out you “simply throw everything on the sheet pan and let the oven do the work for you.” Still, I was delightfully surprised by how well this reinterpretation delivered the expected flavors and textures of chow mein. It’s a great solution for folks who don’t have a wok.

McKinnon starts by sheet-pan roasting bell pepper, broccoli and carrots drizzled with sesame and olive oils until they soften. While they cook, you boil your noodles until al dente, drain and pat them dry, so they’ll crisp.

Then, you push the softened vegetables to one side of the pan and add the noodles, baby corn and asparagus to other side and return the pan to the oven until the noodles are crispy where they touch the pan and a bit on top.

Quickly whip up a sauce of toasted sesame oil, soy sauce, vegetarian stir-fry sauce, white pepper and garlic, and when the vegetables and noodles are where you want them, remove the pan from the oven, pour the sauce over it all and toss it together. You can then sprinkle scallions, cilantro leaves and sesame seeds over, if you like.

Cantonese chow mein is much loved for its contrasting textures, Hetty McKinnon writes in her latest cookbook To Asia, With Love which reflects her experience as someone born in Australia to Chinese-immigrant parents.

McKinnon recommends substitutions for asparagus, such as sugar snap peas or snow peas; and ramen wheat noodles in place of egg noodles, if you want to make the dish vegan. If you cannot find the vegetarian stir-fry sauce, she suggests omitting it.

Storage Notes: Leftovers can be refrigerated for up to three days.

For the chow mein

For the soy seasoning

Make the chow mein: Position a rack in the middle of the oven and preheat to 400 degrees.

Place the bell pepper, carrot and broccoli on a large, rimmed baking sheet and drizzle with the sesame oil and a splash of olive oil, and lightly season with salt.

Meanwhile, bring a large saucepan of salted water to a boil. Add the egg noodles and cook according to the package directions until al dente, four to five minutes.

Make the soy seasoning: In a small bowl, whisk together the sesame oil; the soy sauce, tamari or coconut aminos; stir-fry sauce, if using; white pepper and garlic until combined.

Remove the baking sheet from the oven and push the vegetables to one side. Add the noodles, corn and asparagus to the other side.

Return the baking sheet to the oven and continue to roast for 15 to 18 minutes, or until the noodles are crispy on the top and bottom – you are looking for a combination of crispy and non-crispy noodles.

Remove the baking sheet from the oven, drizzle the soy seasoning all over and toss the ingredients well to coat.

Scatter the scallion, cilantro and sesame seeds on top and serve family-style, or portion into shallow bowls.